You must be 18 years or older to visit this site.
Balashi Brewery Local Beer Pairings—Round 2

This is the second in our series of pairing Balashi Brewery’s beers—Balashi, Chill, Magic Mango, and Magic Orange--with cuisine from Aruba’s restaurant scene.

Saltfish is ingrained in Caribbean’s cuisine, dating back to the 1600’s.  Also called “bacalao,”  fresh, flaky white fish is salt-cured and dried, and when ready to use it is rehydrated to remove most of the salt, but leaving enough behind for flavor. 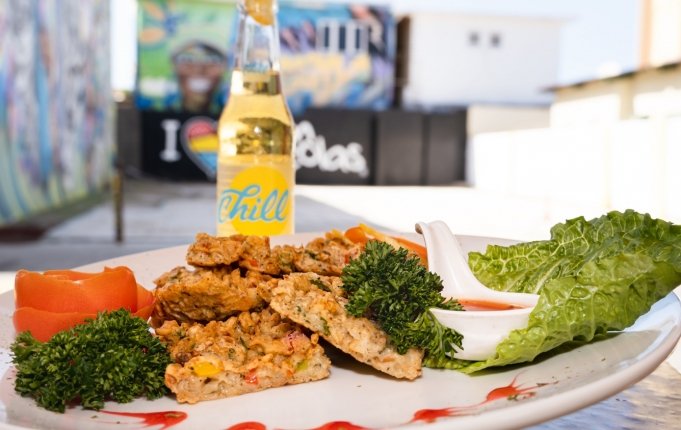 Tucked away in the area of the island known as Ayo, in addition to live glass-blowing demonstrations, Studio Murano Art puts the heat on an incredible menu of gourmet pizzas.  We love pairing the house favorite Murano Pizza with Magic Mango.

The Murano Pizza forgoes traditional mozzarella for imported Spanish Manchego cheese and is topped with prosciutto cotto.  The tropical flavors of mango and the saltiness of prosciutto balance each other nicely, while the hops and barley stand up to the tangy and sweet nuttiness of the Manchego.

Located in the historic district of Wilhelminastraat in downtown Oranjestad, Suikertuin is housed in a lovingly restored historic home.  In this traditional Aruban setting, what better place to pair Aruba’s classic beer, Balashi, with a classic Aruban dish—keshi yena?

The hearty casserole of tender chicken, olives, pearl onions, and raisins is topped with Dutch gouda cheese and baked in the oven until bubbly and golden.  The malt, toasted grain, and mild hops of this pilsner beer complement the dish’s flavors and let them shine. 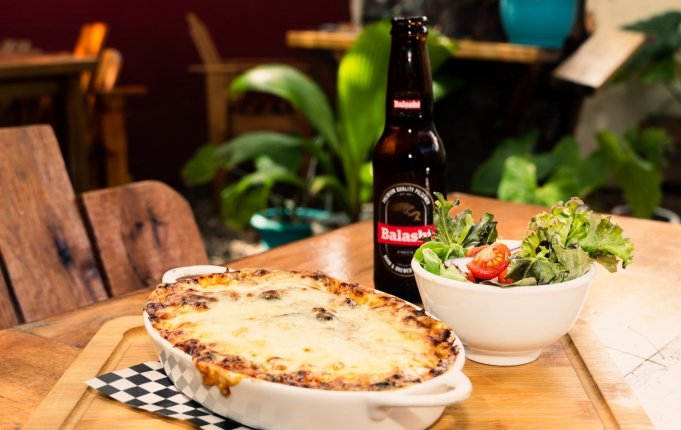 Eduardo’s Hideaway is located in Noord, and helped evolve Aruba’s vegan scene.  The relaxed Bohemian vibe and a menu bursting with fresh ingredients welcomes guests for an inspiring dining experience.  We matched the newest beer in the Balashi portfolio, Magic Orange (yes, our beer is vegan!), with Eduardo’s vegan tacos.

Flour tortillas are filled with avocado, slaw mix, pickled cabbage, and corn salad.  Sipping a Magic Orange helps harmonize all those flavors—especially the creamy nuttiness of avocado and the tang of the pickled cabbage—without infringing on the melodic ingredient composition. 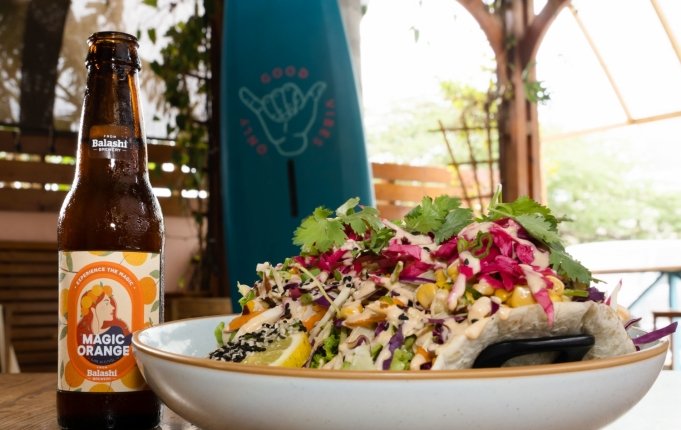